Elise Okusami has been a musician since the tender age of 9 years old when she first learned to play guitar. Her current force of nature quality is clearly inspired by a lifelong intense passion for music. In the 4th grade, soon after learning guitar, Okusami started her first band with her brother and a few friends. She hasn’t slowed since then, also having drummed for multiple projects multiple projects in New York. As she eventually grew into her solo musical endeavor, Oceanator, Okusami has exemplified the sheer power of her project’s namesake through and through.

The influence of her upbringing in 90’s grunge and punk is evident in Okusami’s introspective songwriting. This thoughtful lyricism is put into practice through brooding post-rock ballads like “Coming Home” and “Tell Me” and intense yet danceable synthy indie tracks like “Not Around.” Additionally, Okusami can often be heard engaging with some of the most deeply moving and existential questions of life in her work. A prime example of such a question would be ‘What does it mean to be human?’, which can be heard being contemplated in “Inhuman.” While there surely is a range to Oceanator’s stylistic approaches from song to song, the tremendous powerhouse nature of the project is felt consistently throughout each and every song on Lows. (bio by Delaney Motter) 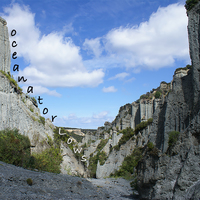