Pendant is the recording project and creative outlet of Oakland-based musician Christopher Adams, who has played in numerous bands in his career, most recently noise-rock outfit Never Young.

Throughout his tenure in the industry, Adams took great joy in the collaborative nature of his bands, but as the years went by, he realized the need to embark on a mission that wholly reflected his musical vision.

“In the past, my default strategy was to love something and then share it with others,” said Adams. “I needed another level of fulfillment. And that was to follow the notion of taking all my favorite ideas and dedicating them to my own music.”

Following that sentiment led Adams to create Pendant, a one-man endeavor in which he writes all the songs and plays every instrument on every track. First surfacing in 2016 with a four-song EP, Adams is slated to release Pendant’s debut full-length November 8th on Tiny Engines. Titled Through A Coil, the new album is an ambitious collection of gauzy slowcore, haunting shoegaze and rollicking Britpop tunes.

Adams started writing music for the album in late 2018, following the dissolution of Never Young, and earlier this year he began recording, working alongside a trio of acclaimed Bay Area producers – Melina Duterte (of Jay Som), Shaun Durkan (of Weekend) and Jack Shirley (whose production credits include Deafheaven and Jeff Rosenstock).

While the songs on Through A Coil range from coarse, biting numbers to balletic, slow-burning ballads, each one has a unifying theme—an unmissable pop hook living underneath waves of feedback and dissonance.

Adams said he was inspired by bands like Autolux, Ride and Slowdive, along with the legendary Scottish imprint Creation Records, and Oasis, who he credits with “impeccable, effortless,” songwriting skills.

Those aforementioned groups all embrace a maximalist approach to their craft—creating stadium-sized anthems, no matter what the audience, so it’s remarkable that Pendant’s one-man shop ably follow in their footsteps. Through Adams’ craftsmanship, each track on Through A Coil is a fully-realized epic, ebbing, rising and abating with a flurry of dramatic moments.

“Rubber Band” is a stirring power-pop nugget, filled with chunky guitar riffs and through-the-roof choruses, while “Name Around My Neck,” is a hazy and expansive dreampop production. “Plexiglass” is an urgent, lilting shoegaze number, while “Dovetail” is pure snarling English energy, a la Oasis and Pulp.

Those evocative sonic landscapes are underpinned by Adam’s weighty lyrics, which explore issues of grief, sadness and contrition. He describes “Through a Coil,” as about being “on the end of an emotional crisis, looking back and forgiving yourself wholly.” “Name Around My Neck” details the dichotomy of “losing your faith in the world while falling in love with someone,” and “Rubber Band” speculates on the difficulty of “finding the right balance within one’s self.”

Adams’ candid and spirited confrontation of those vulnerabilities provides pathos to the album, forging a thematic arc that is both introspective and universal--a connective, relatable tale of a personal journey.

Throughout, the album is imbued with a brazen, restless energy that reflects Adams’ pure artistic focus. On the title track, Adams sings that it’s “Nice to see you realize/You are constantly alive,” a statement that feels like a commentary on his creative rebirth.

Surrounding yourselves with others can be comforting and cozy. But to truly find yourself, sometimes you need to go it alone. Pendant’s Through A Coil is a stirring monument to that fearless approach. (Bio by Will Reisman) 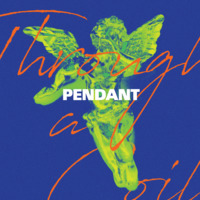