Over the past year there’s been no shortage of blogosphere speculation and message board fodder in regards to Monument becoming the next great emo hope. When the Washington, D.C. quartet released the stellar, much buzzed about and aptly titled 3 Song 7″ in early 2009, many fans and pundits decreed “Cap’n Jazz meets American Football meets Braid” while others pronounced the outfit second only to current emo torchbearers Algernon Cadwallader, an assertion which was strengthened when Monument announced that it would be recording its highly anticipated debut full-length with the aforementioned band’s Joe Reinhart. And let’s not forget that the outfit boasts ex-members of cult heroes The Summer We Went West, as well as groups such as Dawntreader and The Tasty Habits.

Early on, Monument had merely hinted at something special with its 2006 demo recordings and the 2007 follow-up, The Florida EP. But the promise of a forthcoming LP – and especially that head-turning 7″ – spotlighted a group of individuals clearly influenced by its predecessors while having a blast experimenting with its own slant on the genre. If the wildly fluctuating tempos, acrobatic guitars, spirited gang vocals and a knack for driving, uncommonly catchy melodies didn’t get kids stoked, then Monument’s creativity and undeniable enthusiasm sure as hell did.

On that note, if you were betting that Goes Canoeing would make good on the potential of past releases, not to mention the lofty expectations of so many emo boosters, then you picked the perfect time to wager all your underground cred. Seriously, go ahead and bet the farm. Of course, you’d be selling Monument waaaay short as these ten exhilarating, kinetic songs ricochet off so many different musical touchstones that it’s absolutely dizzying … and more fun than anyone should have in half an hour’s time.

From post-punk, noise-pop, grungy 90′s indie rock and even the Dischord-styled hardcore of the band’s D.C. home, Goes Canoeing is as loose and raw as it is infectious and intricately layered. More strikingly is how the members of Monument have grown by leaps and bounds as songwriters. Not many people can compose music this dynamic and brimming with energy … that always feels like its on the verge of careening off the tracks while simultaneously transmitting as completely unforced and organic. This is a record that you know took a lot hard work and countless hours to make, yet it all sounds like second nature to the band.

Perhaps Monument’s most charming, engaging attribute is its ability to craft songs with depth and complexity, as well as a wealth of peculiar chord progressions and unconventional harmonies. On paper, Goes Canoeing doesn’t seem like a record that would drill itself into your brain and stay there for days and days, but songs like “Glass House,” “This Is 113″ and “Diamond Age” are teeming with loads of off-kilter pop moments: contagious sing-along choruses, background whoa-ohs, chunky riffs and a propulsive rhythm section that simply doesn’t quit, to name just a few. You’re as likely to discover a bout of animated hand clapping or an off-the-cuff trumpet solo as you would a wiry, complex guitar line, gruff call-and-response shouting or a swelling instrumental interlude that’s more indicative of the current batch of emo revivalists.

Obviously, we love that Monument’s foundation was built by bands like Braid and Cap’n Jazz, but there’s just as much Meneguar or Teenage Cool Kids thrown in the mix as well. More importantly, let’s recognize Goes Canoeing for blazing its own unique path. These are wonderfully skewed, raucous anti-anthems for emo, indie, punk and hardcore kids alike. We thought that Monument would probably dream up with something amazing, but we never expected them to compose a record that would establish a new template for this type of underground DIY music for years to come.

Goes Canoeing was recorded and mixed by Algernon Cadwallader’s Joe Reinhart (My Heart To Joy, Restorations, Snowing) at The Headroom in Philadelphia, P.A. and was mastered by Ryan Schwabe at The Maniac Mansion. Tiny Engines will release the 12″ LP version of the record in early 2011 while the digital version gets an early November 16, 2010 iTunes release from the label. Monument has also self-released a CD version of Goes Canoeing, which you can purchase here. 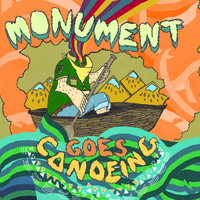