Long, long, ago, deep within the ancient Dwarven forges of Holliston Keep, an iron kinship once was wrought. Emerging unto the world above, this fellowship of five became known to all as Save Ends. This group of like-minded minstrels immediately began to spread their melodic tales of mischief and revelry throughout the land. To further imprint themselves on the annals of history, Save Ends complied a collection of five of their greatest works, and thus it became known as “Ten Or Better”.

Our band of merrymakers continued to trek about the countryside, relaying these chronicles of adventure to all those who would lend an ear. The world was at peace during this time of joy and song. In time, though, dark clouds began to line the horizon. Faint whisperings of evil and misery began to pervade throughout. Talk of the return of the once cruel and malevolent warlock king known as “Büttrok” became prevalent amongst the people of Regular Earth. It soon became clear to Save Ends that something must be done to lift this darkness. Something must be done to eliminate this threat from the world henceforth.

And so, they buried themselves deep within the halls of Holliston Keep, and set out to craft the ultimate rebuttal to this manifestation of atrocity. Heavy in their hearts, yet steadfast in their purpose, Save Ends slowly began to piece together this harmonious riposte. Finally, in the morning twilight of one particularly sanguine spring day in the year two-thousand and twelve, this gathering of wearied artisans emerged from their subterranean refuge, bodies battered, and minds tapped dry. These debilitating efforts were not in vein, however. Clenched tightly in the fist of the one they called “Hog”, capturing every gleam of the Sun’s radiance, was a glistening beacon of hope.

They call it “Strength Vs. Will”. Its purpose is clear: To overcome all that is vile and repulsive in the sound sphere of Regular Earth, and bring back the peace and serenity that once was. May Apollo’s Lyre bless it with good fortune when, in this summer of two-thousand and twelve, Save Ends prepares to unleash it far and wide, and bring harmony back to this world. 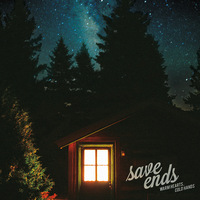